Perhaps one of the hardest things to get the public, general educators and, in some instances, parents to understand and accept are the disabilities that are not obvious.  Statistically ten percent of the population has an invisible disability.  (What Are Invisible Disabilities?) 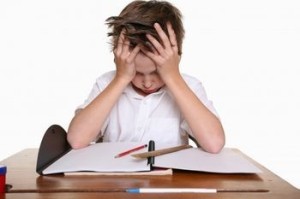 These invisible disabilities are hard to accept and so easy to deny. They are also easy to hide if you do not want others to know you have a disability, evidenced by so many children in school settings that do not want to appear different to classmates so they reject assistance and suffer in silence.

What more commonly happens as a result is that the disability goes undiagnosed or not served.  Instead we call the child lazy, accuse him of faking or of just being a bad kid due to lack of appropriate parenting.

If the child could do it she would, just to get the pressure off, but she can’t.  So then it becomes an issue of actually punishing a child for having a disability.  Over and over it happens every day until eventually the child just gives up.

We know, statistically, that the invisible disability population is more likely to end up in the juvenile justice system (Wrightslaw – Juvenile Justice) yet we continue to punish rather than provide the support needed because someone just looks at the child and makes the determination that the child just needs to try harder, and maybe punishing more is the answer.

Despite the fact that children with invisible disabilities make up the largest percentage of children served under IDEA and section 504 they are often not identified or served until they are so far behind that they never catch up and suffer the consequences in silence while struggling with three hours of homework each night – assisted by an equally frustrated parent with an invisible disability of their own.  (What Causes Learning Disabilities?)

We have made some progress in the early identification of children with Learning Disabilities using the Response to Intervention process by looking at behavior and academics in educational settings  (The Essential Components of Response to Intervention)  using scientifically based researched instruction designed  to provide early intervening services that would eliminate children falling through the cracks to the point of getting so far behind before being identified.

But like most disability laws they too have fallen far short of their original intention when enacted. Children continue to be lost to a bureaucracy driven by a focus on overall scores and not individual needs.

The really sad part of this is that these individuals have so much to offer, and can be gifted in so many areas, but will never be given that opportunity simply due to the invisibility of their disability.  Once again it appears that the real barrier lies not with the disability but with those without disabilities that fail to recognize its existence.

I can only shake my head knowing full well that everyone will, without fail, experience disability at some point in their life – and maybe then they too will understand what discrimination on the basis of disability truly feels like.